I got a tattoo.

I’m not having a third-life crisis, I swear. At least, I don’t think I am.

At this moment in my life, I need to be reminded over and over again that I come from somewhere, that where I come from matters, and that as Someone who Comes from Somewhere I have a responsibility about how I choose to be in the world. And that, for me, is the crux of what it means to be a princess. I know, princess can mean lots of things to lots of people. That’s fine. But I’ve decided to reclaim that title for myself (and for my daughter, to whom I very strongly desire to show some example of a princess besides the not-too-bright Ariels, the entranced Auroras, or the smart-but-abused Belles of the world).

So for the first tattoo I decided that I wanted to be reminded of this idea all the time.

But as important as that concept is to me, I’m not really a “‘Princess’ in a girly font” on my arm kind of person, so I did like my daddy raised me and wrote it in elvish. Qenya (high) elvish, to be exact. The tengwar is mostly the same, but high elvish is based on greek and latin and looks and sounds fancier than Sindarin, which is loosely based on Welsh. Even though my family history is vaguely Welsh (my maiden name is, anyway–apparently “Pharis” meant “gravel-digger”), I chose Qenya because there is no official word for princess in Sindarin. Long story short (Too late!) words are interesting and important to me.

The tree of Gondor represents a return of hope and a renewing of strength. Gondor was a country that many people had given up on. The time of men was assumed to be drawing to a close; their strength failing. The tree had stood bare in the Court of the Fountain for many years. But when a “rightful and true” king ruled in Gondor the tree, the country, and the people in it were able to flourish again.

“When, finally, Gandalf takes Aragorn up into the mountains and shows him a slender white sapling in the snow, a sense of fulfillment wells in us all. The tree is found; the world is right for now. The first sign that the time is imminent is the Elven-woman Arwen’s gift of a banner with “seven stars and seven stones and one white tree” (1966 ROTK, p.27), sent as Frodo nears Mt. Doom and the last battle approaches. When Frodo’s quest is over and Mordor has been defeated, the last sign that is awaited to indicate the world has been set right is the return of the living White Tree to the courtyard.

The living White Tree is the final symbol of recovery for Gondor, a country that looked at one time as though it were in its last decline. This is significant to Tolkien’s theory on the importance of fantasy in general. Tolkien saw fantasy as a potent form of art that, through the powers of sub-creation and enchantment, could provide readers with the healing gifts of recovery, escape, and consolation. These are all gifts that Tolkien’s trees bear to Middle Earth. As Hans Christian Andersen said, “green is good for the eyes” (1981 Lewis, p.91), so Tolkien might have added: and for the heart.”

If you’d like to read a long-ish and entirely wonderful essay on Tolkien and trees, you can find “Tolkien’s Trees” by Claudia Riiff Finseth here.

I am grabbing hold of hope and strength for myself and for my loved ones. It’s really hard work. And if the craziest thing I do in the process is to get a tattoo (or two!), I can live with that. 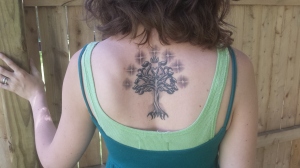 Because some people have already asked, I’ll add here that my very talented cousin, Dan Clay Smith did these. I am so very pleased with his beautiful work and really appreciated being able to trust his very knowledgeable advice about where and how to tattoo so that it will look the best possible now, heal well, and still be what I want in 20 years. If you’re around Harrisburg, PA I highly, highly recommend him.